I've been looking for this slide since I saw it presented at a Yammer event earlier in the year. 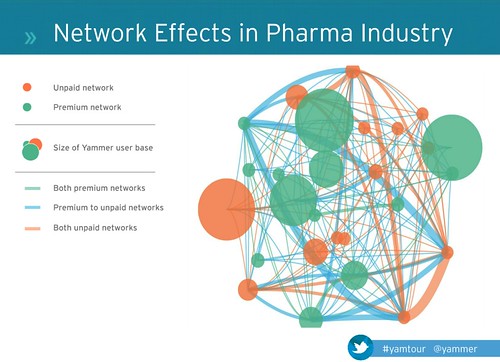 I remember thinking at the time, forget the features of Yammer itself but look at what they are actually building with their external networks. If ever email should be worried, it would be what this diagram shows. (I'm sure that regulators and risk managers are too, but that's another discussion.)

This sort of network is a lot easier to build in a centralised cloud environment, but not impossible to federate as demonstrated with email and more recently with social platforms like Status.Net (also see OStatus). Even so, centralised proprietary networks find it a lot easier to get traction with users (look at Twitter, Facebook).

One of the interesting things about Yammer external networks is that even if you don't use Yammer in your own organisation, you end up creating an account to interact with other networks that do. Rightly or wrongly, this is probably overlooked in the viral adoption stories and its not a feature common to other enterprise social computing platforms.

I wonder if Yammer and Microsoft really realise what they are sitting on with external networks? Even if Yammer is overtaken by other platforms (even SharePoint 2013) they still have the potential to be the connector, rather than the primary network.