As you may be aware, Twitter is transforming its technical platform to match what it considers to be a brand-friendly business model (i.e. its going to involve advertising). The main impact is on the tools that consumers will use or that people will embed on Websites. We are now starting to get a glimpse of what new features Twitter's stricter control of that UI will bring - for example, user surveys and a new visual profile design. 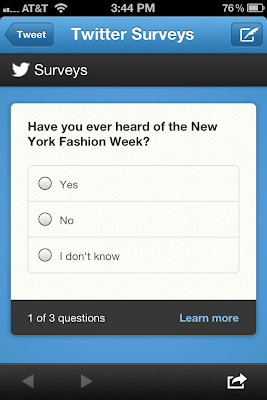 Despite being a fan of Tapbots software and the old version of Tweetdeck (search around and you can still find copies of version 0.38.1 released in 2010), I've been making an effort to live with the official apps for the Web, desktop (MacBook Pro) and iPhone.

I absolutely hated those apps when they were first released, but I've been trying them again.

The Web app is probably the best of the bunch, but as we (and Facebook has discovered) users are migrating to the mobile devices. Luckily, the mobile app is reasonable (probably enough for a typical user). The desktop app I've found to be limited and (on my MacBook Pro at least) unstable at times.

One of the most annoying user interface (UI) problems with the desktop app is the pop-up dialog to post a tweet - once you invoke it, you can't access the columns or even save your tweet as a draft. The @ user search feature is also hit and miss. As a result, I find myself using (new) Tweetdeck in tandem with the Web version and TextEdit.

But overall, I have to say that there are a myriad of issues across all three tools that frustrate me as a Twitter "power user". Obviously I have the option to use an authorised business apps, but I don't actually need that level of functionality day-to-day.

I find myself struggling to perform simple actions in the mobile app, which are simple and intuitive in Tweetbot. Having said that, I do like the new visual profile header in the official Twitter mobile app! (the allure of shiny!)

I have no problem with what Twitter is doing to create a sustainable business model. I'm not keen on app.net as I value the diversity and reach that has developed in Twitter as it has become more popular. But as they clamp down on their consumer app developer ecosystem, I fear for the quality of the interface that might end up only being usable for the lowest common denominator user.

If we compare Twitter's approach to that of Apple, if they want to control the consumer experience they have to get it 100% right, every time. Otherwise app.net or Google+ might well be their Samsung.